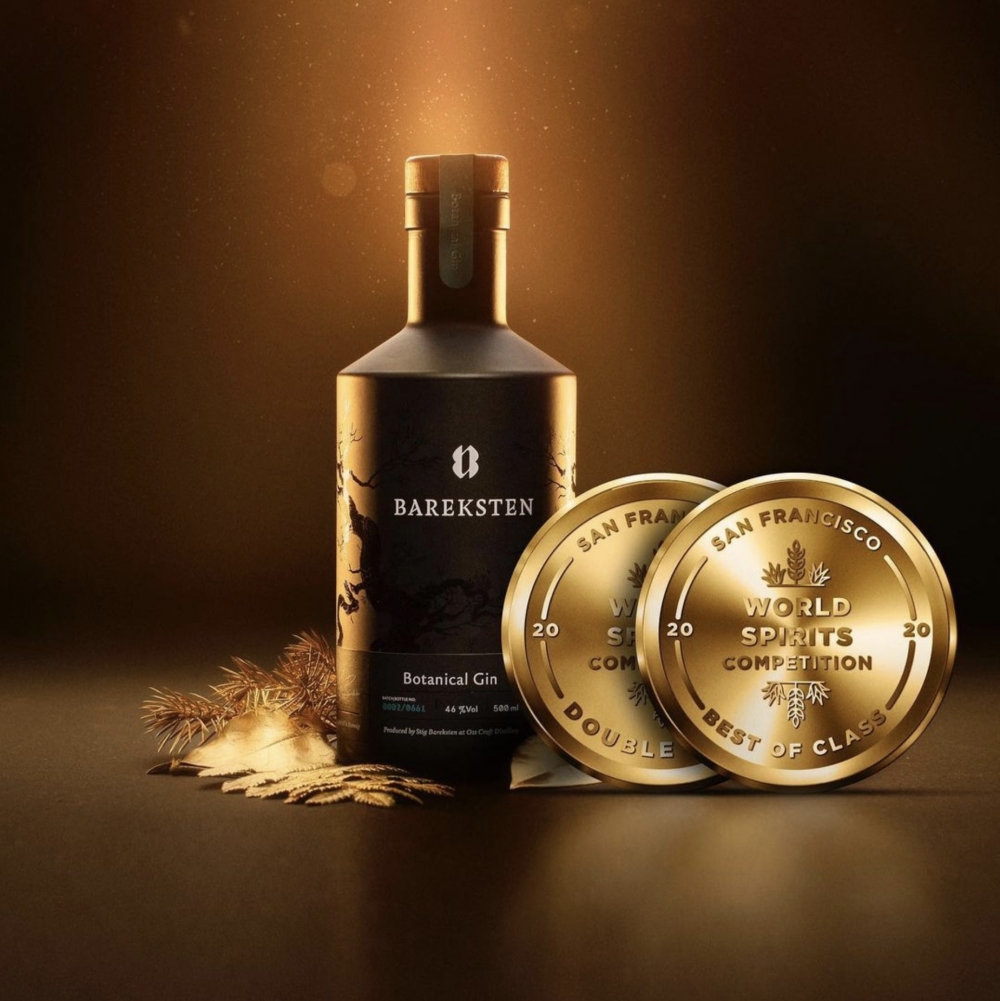 Bareksten has been awarded Double Gold in one of the world’s most prestigious spirits competitions. The gin, produced by Stig Bareksten of Oss Craft Distillery in Bergen, Norway, earned the honour by wowing judges at the San Francisco World Spirits Competition in the USA.

Unanimous
All 42 of the event’s judges - renowned industry experts - awarded Bareksten Botanical Gin maximum marks. Because all of the judges were in unanimous in their decision, the gin was then awarded the coveted Double Gold award.

According to organisers of the competition, one of the longest-running of its type in the world, Double Gold is only ‘awarded to the very few entries that receive a Gold medal rating by all members of the judging panel; among the finest products in the world’.

‘Absolutely thrilled’
Stig Bareksten said: ‘I am absolutely thrilled with this award. The San Francisco World Spirits Competition is world-renowned and one of the most respected events of its type.

‘All the judging is done by blind tasting, which means that it really does all come down to the flavour and quality of the spirits. To win Double Gold in the gin category feels amazing. It’s a fantastic achievement and really feels like vindication for all the hard work that has been put into Bareksten over the years. Out of more than 2,000 entries, just a handful received the Double Gold.’

Stig, who chose international branding agency Kind to create and manage the overall branding and visual identity of Bareksten, added: ‘Bareksten Botanical Gin is truly on the world stage now. These awards are renowned internationally and the Double Gold achievement is something that is recognised the world over.

‘We always wanted to make the world’s best spirits. We knew this was the case, of course, now it’s official!’

‘All of the team here at Kind are extremely proud of Stig’s achievement and the success of Bareksten in such a high-profile, tough competition. We are delighted to have played our part in Bareksten’s success on the world stage.’

‘Proud’ Kind’s CEO, Creative Director and Founder Tom Emil Olsen, said: ‘All of the team here at Kind are extremely proud of Stig’s achievement and the success of Bareksten in such a high-profile, tough competition. We are delighted to have played our part in Bareksten’s success on the world stage.’

Bareksten represents the essence of Norway – dark, wild, breathtaking, dramatic. Clean flavours inspired by ancient craft traditions are at the very heart of the brand’s ‘botanical wonders’. It has been in production since 2016, together with other Barekesten spirits including vodka, aquavit and blueberry liqueur.

Well known Stig is well known as the founder of Det Norske Brenneri (The Norwegian Distillery), where he developed brands such as Arvesølvet, Harahorn Gin and Eiktyrne (Norway's first whisky).

He is a former Norwegian champion bartender and the brands he has worked for include The Macallan Whisky and The Famous Grouse. Now, Stig is chief distiller and general manager for Oss Craft Distillery, Bergen, where he produces the Bareksten range.