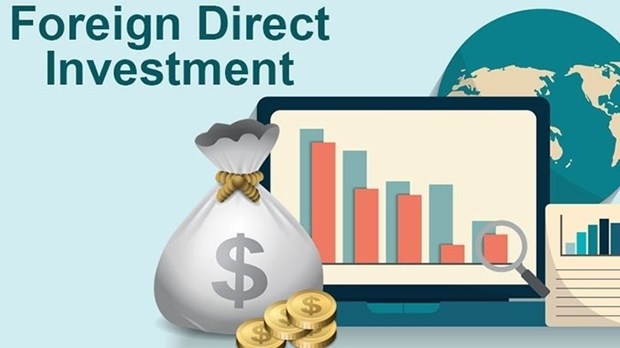 Hanoi (VNA) – Vietnam attracted 31.8 billion USD in foreign direct investment (FDI) in the first 11 months of 2019, up 3 percent year-on-year, according to the Foreign Investment Agency (FIA) under the Ministry of Planning and Investment.

Of the figure, 14.68 billion USD was poured into 3,478 new projects, up 28 percent for the number of projects but down 7 percent in terms of capital.

Up to 5.87 billion USD was pledged to 1,256 existing projects, equivalent to 79.3 percent of the value from a year ago, but up 20 percent in the terms of the number of projects.

During the period, foreign firms invested 11.24 billion USD in Vietnam through capital contributions and share purchases, representing a yearly rise of 47.1 percent and accounting for 35.4 percent of the total registered capital.

Notably, from January to November, the number of business delegations arriving in Vietnam to seek investment opportunities increased by 30 percent compared to last year’s corresponding period. Most of them came from Japan, the Republic of Korea, mainland China, Hong Kong and Singapore.

Processing and manufacturing remained the most attractive sector to foreign investors during the 11 month period, drawing 21.56 billion USD, making up 67.8 percent of total FDI pledges. Property trading came second at 3.31 billion USD (10.4 percent of the total), followed by wholesale and retail and science and technology.

Among the 117 countries and territories investing in Vietnam, Hong Kong retained its crown as the largest investor with 6.69 billion USD, making up 57 percent of the nation’s total FDI. It was followed by the Republic of Korea with 5.73 billion USD (18 percent) and Singapore with 4.47 billion USD (14 percent). The country’s other sources of FDI were mainland China and Japan.

The capital city of Hanoi was the largest FDI recipient during the period with 6.82 billion USD, accounting for 21.5 percent of the total. HCM City ranked second with 5.48 billion USD (17.2 percent), followed by the southern provinces of Binh Duong and Dong Nai and the northern province of Bac Ninh.

According to the FIA, the foreign-invested sector earned nearly 166.7 billion USD from exports in the reviewed period, 4 percent higher than the same period last year or equivalent to 69 percent of the country’s total export value.

The sector spent 134.1 billion USD on imports, up 3 percent year-on-year, resulting in a trade surplus of nearly 32.6 billion USD.

As of November 20, the country was home to more than 30,470 valid foreign-invested projects with total registered capital of 360.69 billion USD. Nearly 60 percent of the FDI pledges had been disbursed./.