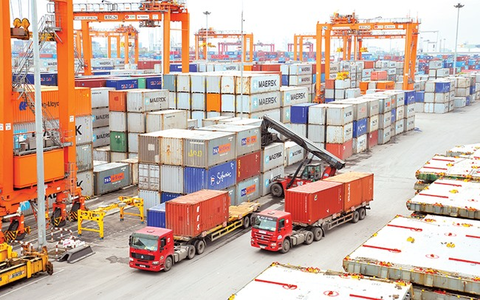 As many as 28 commodities reported import value of more than a billion USD in the first seven months of 2019 (Photo: cafef.vn)

Hanoi (VNA) – As many as 28 commodities reported import value of more than a billion USD in the first seven months of 2019, according to the General Statistics Office.

In combination, the 28 commodities made up 85.8 percent of total purchase from foreign countries in the reviewed period.

Vietnam splashed out 143.34 billion USD on imports during January-July, up 8.3 percent against the same period last year.

Of the sum, some 60.83 billion USD was contributed by the domestic economic sector, a rise of 12.6 percent, and 82.51 billion USD by the foreign-invested sector, growing 5.3 percent.

Most of the goods were bought from China, the Republic of Korea, the US, ASEAN and European countries.

Vietnam earned 145.13 billion USD from shipping goods abroad in the first seven months of the year, a year on year surge of 7.5 percent, resulting in a trade surplus of 1.8 billion USD.

The growth in export value was mainly contributed to by 24 ‘billion dollar’ goods items, which accounted for 88.1 percent of total export revenue. Telephones and spare parts were the largest earners, followed by electronics, computers and spare parts, and garment and textiles.

Meanwhile, shipments of vegetables and fruits, coffee and cashew experienced a fall compared to the same time last year.

The US was the largest importer of Vietnam in the period while the EU and China came second and third, respectively.-VNA