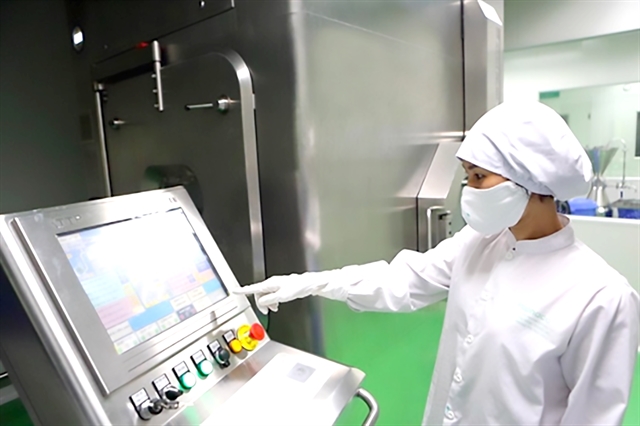 While most manufacturing and trading industries faced difficulties due to rising input prices, the pharmaceutical industry has been less affected.

Financial statements from the first quarter of 2022 of many listed pharmaceutical companies showed that the average input cost structure was 60 per cent raw materials, 20 per cent labour, 10 per cent marketing and 10 per cent for other expenses.

The cost of raw materials accounted for a large proportion, but the ingredients that make up drugs need many different active ingredients and pharmaceuticals, so the increase in the raw material price affects the price of the drug was separated.

During the COVID-19 outbreak in two major pharmaceutical suppliers, China and India, the application of strict distancing measures raised the cost of raw materials. However, many companies offset this cost by increasing selling prices.

The implementation of the "zero COVID" policy by China has not recorded any significant impact on the supply chain of pharmaceutical raw materials.

India, the second largest producer of medicinal raw materials, is stepping up production and export to replace China's dominant position in the market. Raw materials from India are expected to help reduce prices in the near future.

SSI Research said that demand for pharmaceutical products will continue to increase. In the first quarter of 2022, the total pharmaceutical revenue of Việt Nam was estimated to increase by 7 per cent over the same period in 2021, of which the pharmacy channel increased by 23 per cent, and the hospital channel decreased by 5 per cent.

Sales in 2022 of pharmaceutical companies will be driven by high growth in pharmacy channels in the first half of the year and the strong recovery of hospital channels and drug procurement are expected to return to normal in the second half of the year.

The pharmaceutical industry's revenue in the last six months of 2022 is estimated to increase by about 13 per cent over the same period in 2021, so the figure for the whole year would be 11 per cent, recovering almost to the level before the appearance of COVID-19. The race to open new pharmacies of major drugstore chains such as Pharmacity, Long Châu and An Khang will stimulate the pharmaceutical industry's revenue to grow.

Chairman of the Board of Directors of FPT Retail expects that by 2022, Long Châu chain will bring about VNĐ50 billion (US$2.16 billion) to VNĐ100 billion of profit, up from nearly VNĐ5 billion in 2021.

According to market research firm IBM, the Vietnamese pharmaceutical market in 2021 was worth around $7.7 billion and is expected to reach $16.1 billion by 2026.

“The pharmaceutical industry has long-term growth prospects, but the stocks have not yet really attracted investors, because the business results are generally stable through years, there is no breakthrough,” said Lê Đức Khánh, Director of Analysis, VPS Securities Company.

Phan Dũng Khánh, Director of Investment Advisory, Maybank Investment Bank Securities Company, said that when the market rallies, the price increase of pharmaceutical stocks are usually lower than the common ground. However, this is considered a group of accumulation for the cash flow during the difficult period of economy and stock market. VNS