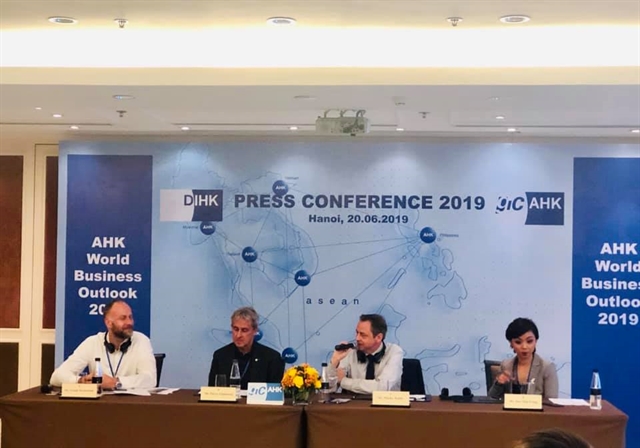 Chief Representative of AHK Vietnam Marko Walde, the second from right, discusses about investment environment with participants at the conference in Hà Nội on Thursday. — VNS Photo Thu Giang

The AHK world business outlook 2019 was released in Hà Nội yesterday by the Association of German Chambers of Commerce and Industry (AHK) in Việt Nam at a press conference.

The outlook, conducted with the participation of nearly 1,000 German entrepreneurs in Việt Nam from April 1 to April 31 this year, showed Việt Nam continued to be an investment destination for German businesses with high expectations of economic development in the medium term.

“German enterprises continue to see positively about the development situation of their businesses as well as the prospects for growth in 2020, despite the instability of the global economy due to escalating trade tension,” the outlook said.

As many as 77 per cent of German businesses in Việt Nam said their business situation was better this year, much higher than the average of Southeast Asian countries of 61 per cent.

With many achievements in economy, investment and social development in 2018, Việt Nam received confidence from German enterprises in economic development within the next 12 months, with 67 per cent of firms optimistic.

The outlook also revealed that 55 per cent of German companies in Việt Nam intend to expand their activities in the country and 59 per cent expect to hire more workers.

German enterprises expect that the free trade deal between the EU and Việt Nam will improve the legal and economic policy framework in Việt Nam.

However, 51 per cent of German businesses stated that economic policy in Việt Nam would be a challenge to their development within the next 12 months.

Chief Representative of AHK Vietnam Marko Walde said many German businesses wanted to do business in the long term from 20 years to 30 years in Việt Nam and needed an encouraging business and investment environment.

“The businesses do not want to build a factory that import parts, then produce and export. They want to set up factories serving sustainable business development, creating partnership with Vietnamese firms and competitive environment in Việt Nam,” Walde said.

He said other important factors that contribute to the development of businesses from the perspective of the German enterprise are domestic market demand, the stability of the political system, the source of high-quality labour and regional demand.

‘When the businesses invest in modern technologies, they will need skillful workers. A practice-oriented vocational training system will not only serve German businesses, but also for the development of Việt Nam,” Walde said.

“This will help build a new generation with profound knowledge, practical and communicative skills. This is a competitive advantage of Việt Nam which can assure the sustainable development in the long run,” he added. — VNS