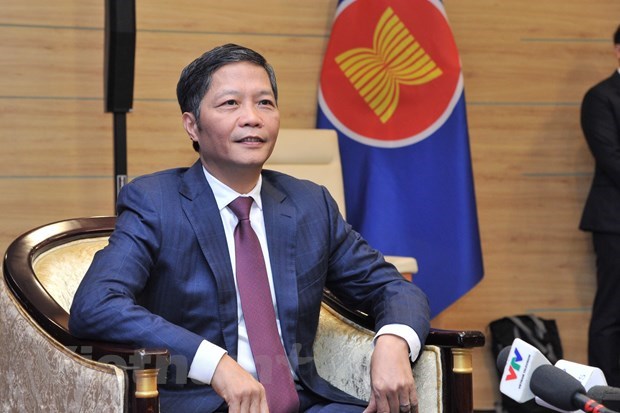 Hanoi (VNA) - The Regional Comprehensive Economic Partnership (RCEP) has given Vietnam and other ASEAN countries a perfect opportunity to become a centre of investment attraction, said Minister of Industry and Trade Tran Tuan Anh.

Minister Anh considered the deal has created a new entity and a new model of trade and economy, forming a foundation for a free and fair trade framework to protect the interests of nations, especially developing ones including Vietnam.

He said: “RCEP creates the largest free trade-economic region in the world, accounting for 30 percent of global GDP with 2.2 billion consumers.”

The minister said in the context of the pandemic, Vietnam as the Chairman of ASEAN and other partners have done everything possible to close the deal, making 2020 a historic year when ASEAN signed the free trade agreement with five partner countries of the Republic of Korea, China, Japan, Australia and New Zealand.

As RCEP signatories believed India would return to the deal in the future, it could make a huge contribution to the overall stability, peace and prosperity of the region, Anh said.

Anh emphasised the deal could help restructure and reposition supply chains and global value chains, giving small and medium enterprises the opportunity to calculate and rebuild their strategies to join.

He added: “As an open economy and the world's 25th largest exporter, it is a good opportunity for Vietnam to participate in such a changing global supply chain.”

Vietnam has no commitments that go beyond the parameters it has within the framework of the existing free trade agreements with partners, especially between the ASEAN bloc, so the minister considered the competitive pressure of goods in the domestic market was not too heavy for businesses and consumers.

Anh added: “In the context of continued reforms, enhancing production capacity and competitiveness, Vietnam’s economy and businesses have favourable conditions in this deal.”

As RCEP's main objectives and foundations were based on harmonisation of origin procedures, trade facilitation and liberalisation, creating a favourable environment to connect economies to increase production capacity and build ASEAN into a key economic region, together with other FTAs such as CPTPP, EVFTA, “it will certainly continue to promote Vietnam's reform towards more progress and more positivity.”

Anh said though 2020 was a difficult year for Vietnam as the rotating the chair ASEAN in the pandemic, complicated geopolitics in the region and many changes in the RCEP negotiations since the beginning of the year, Vietnam has made great efforts to close the deal on November 15 in Hanoi.

Anh said: “Vietnamese enterprises need to change their business mindset in the new context, taking the pressure from more competition to be the driving force for innovation and development. The deal of RCEP and other FTAs will provide an opportunity for businesses to actively respond to changes in the business environment brought about by international economic integration through the development and adjustment of a medium and long-term business plan to promote the flow of goods into potential partner markets.”

Anh said with the support from his ministry, local enterprises needed to actively seek directions to cooperate with partner markets under the deal to strongly attract direct investment in Vietnam to make effective use of sources, capital and technology transfers from large corporations./.