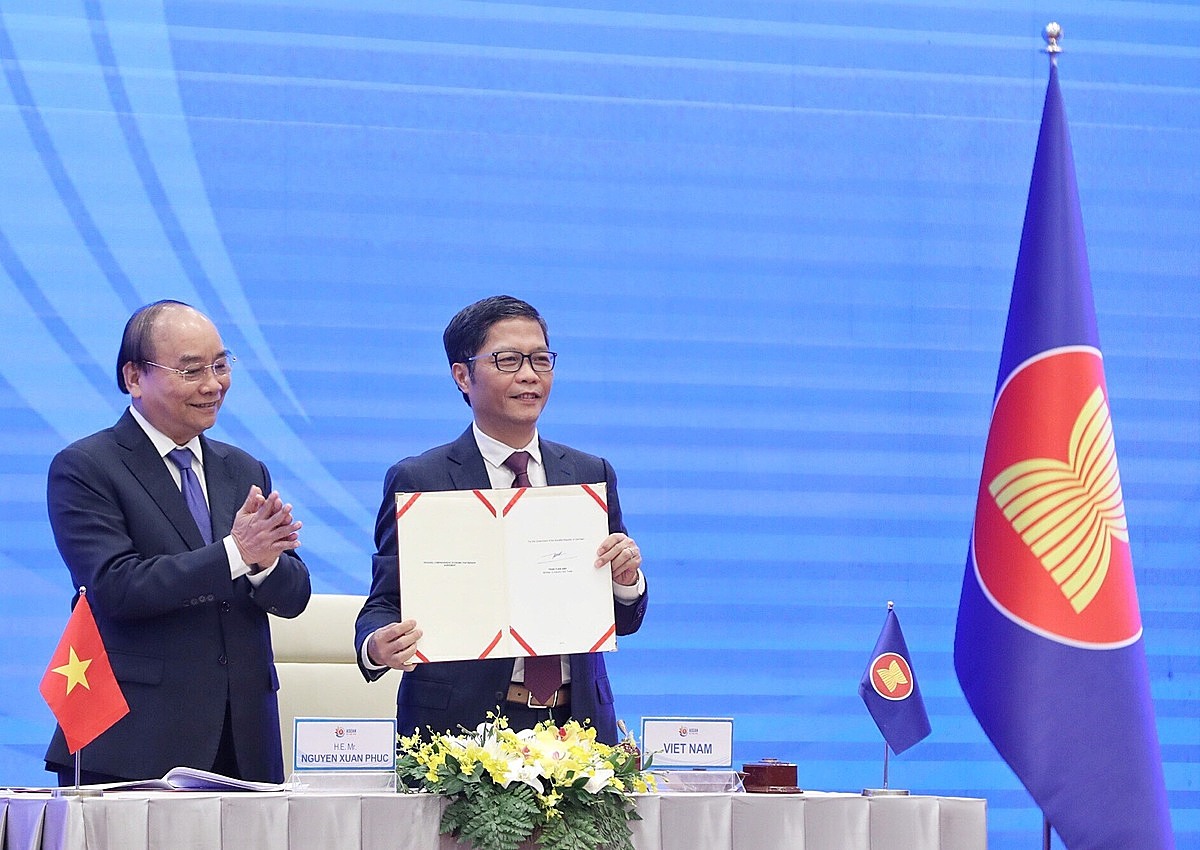 The Regional Comprehensive Economic Partnership (RCEP) was signed Sunday by leaders of 15 Asia Pacific countries that make up 29 percent of global GDP.

The pact was signed online by leaders of 10 ASEAN member states as well as Australia, China, Japan, New Zealand and South Korea as part of the 37th ASEAN Summit chaired by Vietnam in Hanoi.

The free trade agreement (FTA) will give the Vietnamese economy advantageous access to another one-third of the world’s population, generating export growth opportunities in markets which together account for 29 percent of the world’s GDP, or about $26 trillion.

The pact commits signatories to maintain open markets for goods, services and investments, harmonization of rules of origin among all participants, and strengthening trade facilitation measures. The agreement will also provide opportunities to develop new supply chains in the region.

For the agreement to take effect, at least six ASEAN member states and three partner countries have to send their ratification documents to the depositary.

RCEP members say the agreement is open and comprehensive, and is therefore still open to India - which had withdrawn from the negotiation process - to join it even after the agreement comes into effect.

Countries that already signed the RCEP can enter into negotiations with India whenever the latter sends a document to express its intention to join the pact. India can also participate in RCEP meetings as an observer and in economic cooperation activities undertaken by RCEP signatories.

The RCEP will help establish long-term stable export markets for ASEAN countries in the context of risky and uncertain global supply chains. It will also create a legally binding regional framework for trade policy, investment, intellectual property, e-commerce, dispute resolution and others. Overall, it will contribute to creating a fair trade environment in the region.

Vietnam, for instance, can import electronic chips from Japan and South Korea, import textile materials from China then produce goods domestically for export to other countries, and at the same time, satisfy rules of origin within the bloc to take advantage of tariff preferences.

The pact will help businesses in Vietnam access large consumer markets which are double the size of GDP of those under the Comprehensive and Progressive Agreement for Trans-Pacific Partnership (CPTPP).