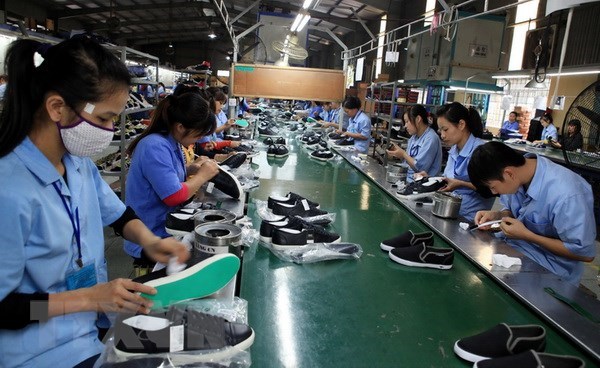 Hanoi (VNA) - Export turnover of leather and footwear is likely to rise again in the fourth quarter of this year, according to the Ministry of Industry and Trade (MoIT).

A ministry report shows that after a slump in the second quarter, orders at leather and footwear companies began to recover in the third quarter, with many receiving sufficient to keep them busy for the remainder of the year.

October footwear production was estimated at 31 million pairs, up 5.3 percent against September and 11.8 percent year-on-year.

In the first 10 months of the year, production was estimated at 249.1 million pairs, an increase of 0.8 percent year-on-year, while exports totalled 13.38 billion USD, down 9.9 percent.

In particular, after three months of the EU-Vietnam Free Trade Agreement (EVFTA) being in effect, footwear has seen growth in exports.

Figures from MoIT’s Import-Export Department revealed that in August and September, the value of footwear products receiving certificates of origin for export to the EU reached nearly 391 million USD.

Despite the recovery in orders, MoIT said that numbers remain modest due to low consumption triggered by COVID-19.

Though the EVFTA is expected to drive growth in the leather and footwear sector, the reality is that not many companies are able to exploit the deal’s advantages.

Some 85 percent of the 1,700 footwear companies in Vietnam face limitations in capital, techniques and technology, and materials. They are also largely dependent upon foreign customers.

Phan Thi Thanh Xuan, Vice President and General Secretary of the Vietnam Leather, Footwear and Handbag Association (Lefaso), said Vietnamese companies have yet to be active in finding customers and approaching markets and also face problems in human resources and infrastructure.

Analysts have said that leather, footwear, and handbag companies should increase the local content in their products to meet criteria in the EVFTA regarding origin. State-owned enterprises should work closely together to optimise the opportunities

Many companies have made preparations to restructure, upgraded their infrastructure, and secured material sources to meet EVFTA requirements, while striving to enhance product quality.

MoIT has predicted that exports will expand in the last quarter of the year, from year-end holidays and festivals in Europe and the Americas.

The sector’s target of 24 billion USD in export revenue is within reach, but repositioning in global supply chains in the future may help Vietnam’s leather and footwear sector increase its market share./.