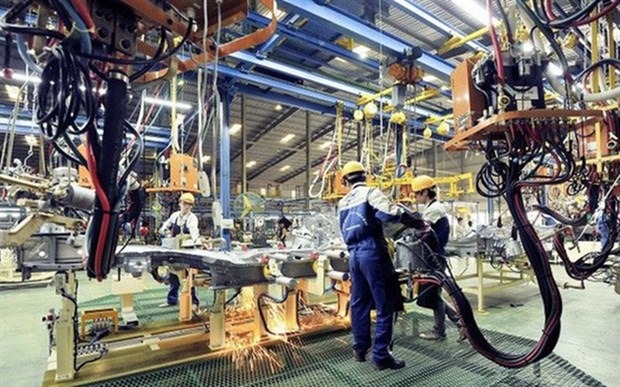 Hanoi (VNS/VNA) - The start of the fourth quarter of the year saw the continued recovery of the Vietnamese manufacturing sector, with the country’s Manufacturing Purchasing Managers' Index (PMI) posting 51.8 in October.

According to the survey released by Nikkei and IHS Markit on November 2, the index was down marginally from 52.2 in September but still signalling an improvement in the health of the sector. With the pandemic remaining under control in the country, firms recorded solid improvements in new orders and output. Moreover, employment returned to growth following an eight-month sequence of job cuts.

Improving operating conditions were noted in the consumer and intermediate goods sectors. On the other hand, investment goods firms posted a deterioration, amid further falls in both output and new orders.

Anecdotal evidence suggested that success in bringing the COVID-19 outbreak under control in Vietnam had helped lead to a recovery in customer demand. As a result, new orders increased solidly for the second month running, subsequently feeding through to a similarly-paced increase in production to that seen for new business.

Meanwhile, new export orders were unchanged amid some demand weakness in markets where the virus continues to cause problems, notably in Europe. Greater output requirements encouraged manufacturers to take on extra staff in October. Employment increased for the first time since January, though at only a marginal pace amid ongoing signs of spare capacity. Backlogs of work continued to decrease.

Higher output requirements also led to a second successive monthly increase in purchasing activity, although stocks of purchases decreased as inputs were used to support output growth. Stocks of finished goods were also depleted at the start of the final quarter of the year.

The COVID-19 pandemic continued to cause issues in supply chains during October. Suppliers' delivery times lengthened to a greater extent than in September. Alongside the direct impacts of the pandemic, shortages of materials and poor weather conditions reportedly contributed to delivery delays.

Material shortages led to accelerating cost inflation, with input prices increasing at the fastest pace since August 2018. The passing on of higher input costs to customers resulted in a second consecutive rise in selling prices. That said, the increase was only marginal and little-changed from that seen in the previous month. Restricting the ability of firms to raise output prices were requests for discounts by clients and competitive pressures.

Firms were generally confident that output will increase over the coming year amid optimism that the virus will remain under control. A number of respondents predicted that new order growth would support rises in production. That said, sentiment was slightly lower than in the previous month and weaker than the series average.

Commenting on the latest survey results, Andrew Harker, economics director at IHS Markit, said: “The Vietnamese manufacturing sector started the final quarter of the year on a solid footing, according to the latest PMI data. This should continue as long as COVID-19 remains under control in the country. The most pleasing aspect of the latest survey was a return to growth of employment for the first time since before the pandemic hit as workloads start to justify rising staffing levels."

“A positive end to the year could set the economy up nicely for a strong recovery to kick in during 2021," he said.

This was the strongest increase in industrial output since June, amid intensive public health measures to contain the spread of the coronavirus outbreak in the country, with output expanding much faster for both manufacturings./.