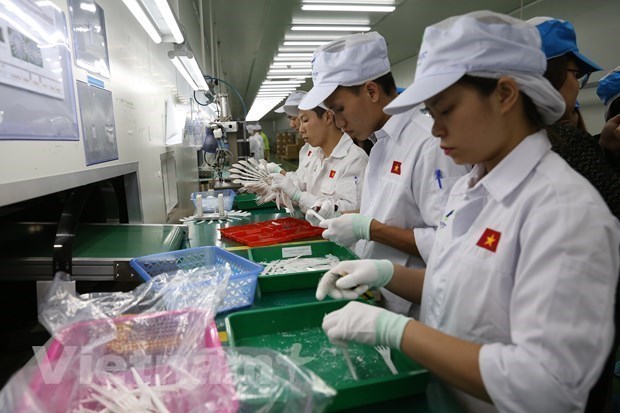 Hanoi (VNA) - Most economic and financial indicators continue to demonstrate Vietnam’s resilience, according to the Vietnam Macro Monitoring report for September of the World Bank (WB).

The report said that the COVID-19 outbreak in Da Nang has been brought under control by the local authorities, which restricted mobility in a targeted manner and increased other mitigating measures. This targeted approach has affected the economy less than the April nation-wide lockdown, it said.

According to the WB, most economic and financial indicators continued to demonstrate Vietnam’s resilience, but the domestic rebound moderated in August, partly as the result of the COVID-19 outbreak in Da Nang.

It noted that exports continued to perform well despite international headwinds, while FDI inflows slowed significantly. Therefore, the WB suggested that attention should be paid to domestic and foreign investors who may postpone their plans in the current uncertain environment as well as the government’s response, which needs to stimulate the recovery in the short term and preserve fiscal and debt sustainability in the longer term.

The report cited statistics of the General Statistics Office (GSO) that showed in the first eight months of the year, budget revenues reached 58.3 percent of estimated collections – down 12.4 percent year on year – due to the economic slowdown and deferred taxes for businesses and individuals designed to support economic recovery. Concurrently, public expenditure was 8.2 percent higher than during the same period in 2019, reflecting fiscal accommodations to support economic recovery.

In line with the objective to accelerate the execution of the public investment programme, capital expenditure increased to 221.7 trillion VND in the first eight months of 2020, up 41.4 percent compared to the same period in 2019.

In August, Vietnam’s export performance remained resilient, growing 1.42 percent month on month, but FDI inflows moderated significantly as they reached about 720 million USD in August compared to 3.1 billion USD in July. Overall, Vietnam received 19.5 billion USD in FDI during the first eight months of 2020, a 14 percent decline compared to the same period in 2019.

Inflation remained subdued at 3.2 percent year on year in August, slightly lower than in recent months due to the stability of food prices. Credit growth continued to moderate at 9.4 percent year on year in July, reflecting the decline in economic activity despite the State Bank of Vietnam (SBV)’s policy of reducing interest rates and encouraging commercial credit.

At the end of August, the level of international reserves held by the SBV was equal to 92 billion USD, up from 80 billion USD at the end of December. While this increase was not as rapid as that reported for the same period in 2019, it demonstrates the resilience of Vietnam’s economy, which reached a record-high merchandise trade surplus and attracted substantial FDI despite the pandemic, the report said.

This performance helped mitigate the impact of lower remittances and foreign exchange earnings from foreign visitors, according to the report. Meanwhile, the resilience of Vietnam’s balance of payments was corroborated by the stability of the value of the local currency compared to the US dollar.

Looking ahead, the pace of economic recovery will depend on how well domestic demand recovers in the wake of the Da Nang outbreak. Greater attention should be paid to the impacts of the crisis and on fiscal and financial stability in the medium to longer terms, and to policies designed to address them, the report suggested./.