Vietnam to stick with pre-pandemic GDP growth target for 2020 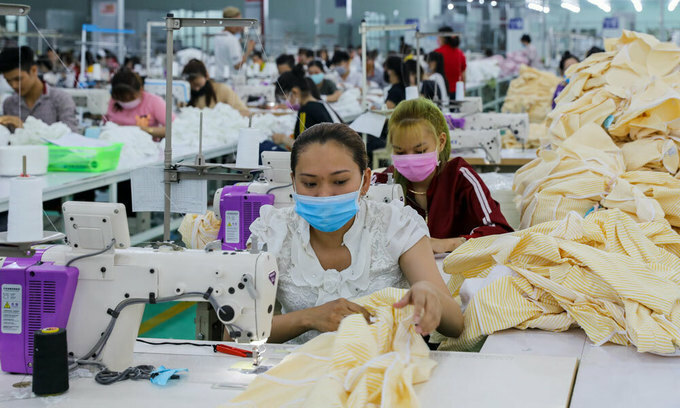 Workers manufacture garment products in a factory in the southern province of Long An. Photo by VnExpress/Quynh Tran.

The National Assembly has agreed not to amend this year’s socioeconomic targets, including a 6.8 percent GDP growth, despite Covid-19 impacts.

Addressing the ongoing parliamentary session, Planning and Investment Minister Nguyen Chi Dung said a similar conclusion was reached by the Politburo at a review session on June 5.

The State Bank of Vietnam would ensure public investment plans are appropriate for the current situation, he added.

He noted: "It is not possible for high growth rates to return in the second quarter" since consumption is still low and businesses are still facing difficulties.

Vu Tien Loc, an NA delegate from the northern province of Thai Binh, however was not reassured by the government's proposed measures.

Loc, also chairman of the Vietnam Chamber of Commerce and Industry (VCCI), said that except for the policy to promote public investment, most other fiscal policies remained cautious, going only so far as deferring tax payments for businesses.

"In this situation, with the majority of businesses making no profit the National Assembly's decision to cut 30 percent of income tax for small businesses at this session does not mean much," he said.

Loc instead proposed extending the tax deferral period for businesses from the current 3 or 6 months to 12 months, and suggested that the government and the Finance Ministry look into using a counter-cyclical fiscal policy to counter the impact of the Covid-19 epidemic.

Phan Thai Binh, a delegate from the central province of Quang Nam, also believed that "the growth target of 6.8 percent in 2020 is a big challenge and difficult to achieve," and asked the government to "look directly at the facts, the reality of the socio-economic situation and give the most accurate forecast."

Last year, GDP growth hit 7.02 percent, the second highest growth figure in the last decade, after a record 7.08 percent in 2018.