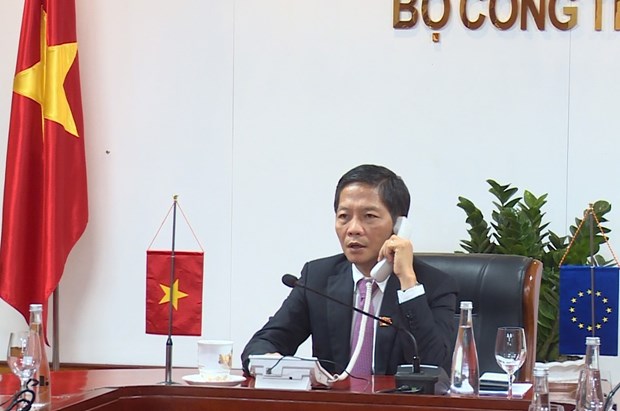 Hanoi (VNA) – Minister of Industry and Trade Tran Tuan Anh and EU Trade Commissioner Phil Hogan reached consensus on the point of time for the EU-Vietnam Free Trade Agreement (EVFTA) to take effect, during their phone talks on June 8.

The talks took place right after the Vietnamese National Assembly (NA) had ratified the deal earlier the same day.

According to the EU’s internal procedures, the EVFTA needs the European Parliament’s ratification and then the European Council’s approval to come into force.

On February 12 this year, the European Parliament ratified the agreement with 63,35 percent of votes in favour. The European Council also approved the trade pact on March 30 and sent a document to Vietnam on April 24 to inform about the EU’s completion of its last legal procedure.

Meanwhile, the EVFTA sailed through the Vietnamese NA on June 8 with the support of all lawmakers present at the plenum.

Under Article 17.16 of this deal, the EVFTA will take effect on the first day of the second month after the month when both sides inform each other about the completion of corresponding legal procedures for the enforcement, or another date agreed on by both sides.

According to Vietnam’s 2016 law on international treaties, after the NA issued a resolution ratifying the EVFTA (usually one week), the Ministry of Foreign Affairs will announce the country’s completion of domestic legal procedures to the EU.

As the EU already gave the notification to Vietnam in April, Vietnam’s coming announcement will also set the date for the EVFTA to take effect for both sides, August 1 as expected.

In case the country wishes the agreement to become effective on an earlier date, it will have to discuss with the EU and wait for results of the bloc’s internal consultation. If the internal consultation lasts for more than three weeks, it will be hard for the Foreign Ministry of Vietnam to send the announcement of the country’s completion of internal procedures to the EU before July 1, according to the officials./.