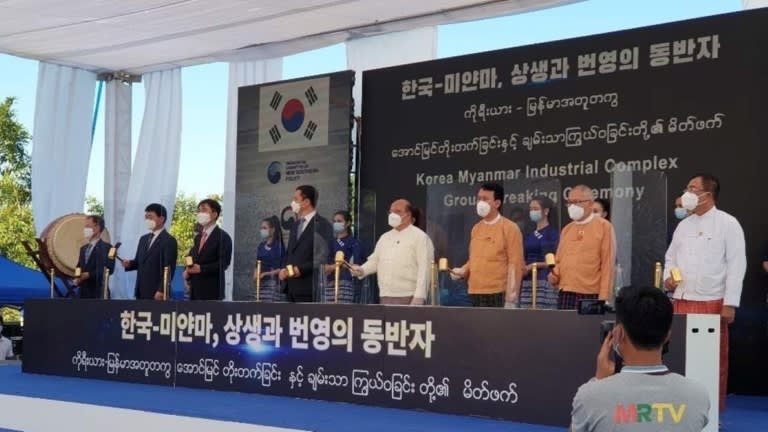 d and Housing broke ground on an industrial park near Yangon on Thursday, becoming the latest foreign company to develop such a project in the country, a move that the Myanmar government hopes will help to draw in overseas manufacturers. Also in the pipeline are similar projects by Thailand's Amata and Singapore's Sembcorp Industries.

Together with its local partner Myanmar's Ministry of Construction, Korea Land and Housing (LH) held a groundbreaking ceremony for the Korea-Myanmar Industrial Complex in the township of Hlegu, which is just 25 km north of Yangon International Airport and 40 km from the city center.

The 225-hectare project is being developed at a cost of around $110 million. The developers are hoping to open around half of the zone in the first phase in 2023. The KMIC will be managed by a joint venture 40% owned by LH, 20% by South Korean apparel maker Global SAE-A and 40% by the ministry.

Myanmar's only industrial park now is the special economic zone in Thilawa on the outskirts of Yangon that was developed by Japan and opened in 2015. The government hopes that by building more such areas with utilities and infrastructure that meet international standards, foreign manufacturers will start to invest in Myanmar.

"Around Yangon, with the exception of Thilawa SEZ, it has been difficult to secure land for large-scale factories. It is highly likely that opportunities to attract investment have been lost to Vietnam and other countries," said Kazufumi Tanaka, head of Japan External Trade Organization in Yangon. "The development of new industrial parks will attract investment." Myanmar has lined up two other such projects that it has also marked as a priority to help the economy emerge from the coronavirus pandemic and as domestic consumption grows.

Amata, a Thai company that develops industrial estates, is holding a groundbreaking ceremony for its Yangon Amata Smart and Eco City project on Sunday. Sembcorp Industries, a Singapore government-linked conglomerate, is also planning to build an industrial complex in a Yangon suburb.

If all goes according to plan, three new industrial parks near Yangon, built by foreign companies, will be completed within a few years.

To support the KMIC, the South Korean government will extend concessional loans from its Economic Development Cooperation Fund, set up in 1987 to promote economic cooperation with developing countries, to Myanmar to finance the construction of an electric power substation, transmission lines from the national grid and water supply facilities.

Seoul will also support a project to expand a road to four lanes from the current two that connects the complex to an express highway linking Yangon and Mandalay, the country's second-largest city.

KMIC rental will cost less than in the Thilawa zone, at $69.30 to $75.60 per sq. meter for a 50-year lease, according to the KMIC operator. Thilawa leases were around $80 per sq. meter in 2018, according to a survey conducted by Myanmar's Directorate of Investment and Company Administration.

LH is not concerned about competition with Thilawa and other projects because the potential for investment in Myanmar is huge, Lee Jung Wook, managing director of KMIC Development, told Nikkei Asia. "It will be a blue ocean rather than a red ocean," he said.

Lee said KMIC is better connected than Thilawa. Despite its greater distance from a port, it is linked to the two top cities by the expressway. "If you want to provide your products to other cities, KMIC's location might be much better than Thilawa," Lee said. 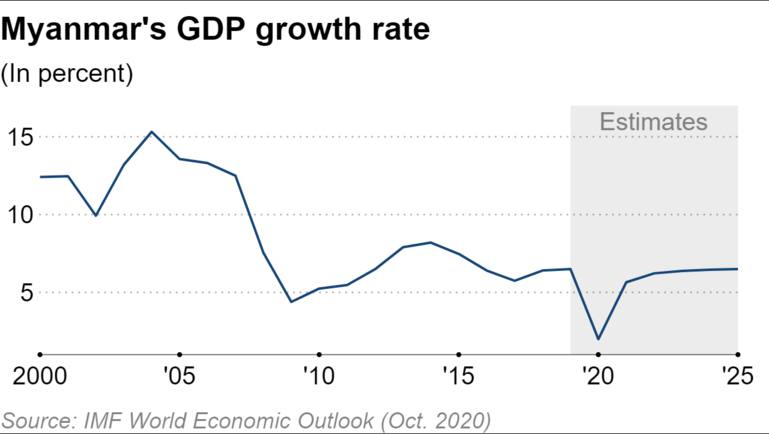 Myanmar Japan Thilawa Development, which manages the industrial park, is 49% owned by a group of Japanese trading houses, the Japan International Cooperation Agency and other companies. It has already developed 583 hectares and will add 46 in April 2021.

Preparatory work on the 800-hectare Yangon Amata Smart and Eco-City project, northeast of the city, is also underway, with the operator optimistic about moving in clients soon. "We are advancing preparations so that clients if they wish, can begin operating as early as in 2021," Yasuo Tsutsui, managing director of the venture, told Nikkei.

In the first phase, 80 hectares will be developed and Amata -- which will hold 80% of the project and the government the rest -- said it was ready to begin work on 40 hectares. Amata expects to charge $75 or so per sq. meter for a 50-year lease.

The 436-hectare Sembcorp project is estimated to cost $230 million, although its launch date has yet to be announced.

Sembcorp, which is experienced in building industrial parks in developing countries including Vietnam, will take a 67% stake in the project. Another 18% will be held by Pahtama Group, a leading wholesaler under the wing of Myanmar's biggest consumer business company, City Holdings, and 15% by Myanmar Agribusiness, a major agricultural business operator.

Kelvin Teo, CEO of Sembcorp Development, wrote in response to emailed questions by Nikkei that Myanmar faces "challenges of shifting from small-scale cottage industry manufacturing to large-scale manufacturing in a factory setting," but he added that "we think that foreign manufacturers can overcome this and bring modern systems and processes to raise local standards."