Bangladesh is on right track to attract FDI: Speakers

Source from: The Independent 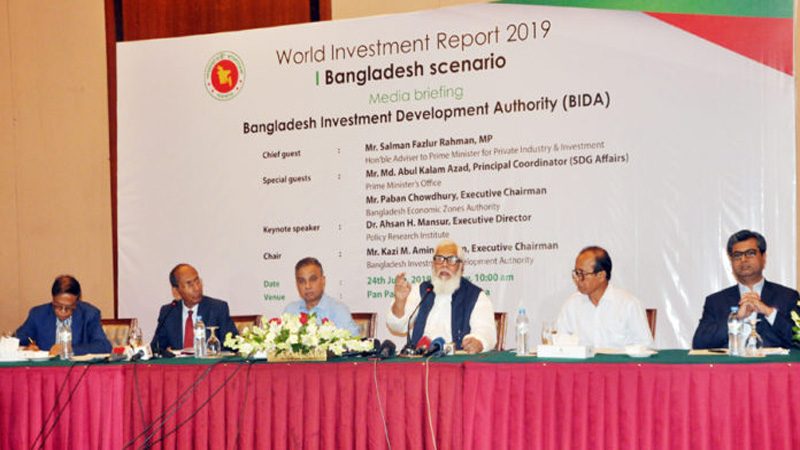 Though the global flow of Foreign Direct Investment (FDI) is showing downward trend, Bangladesh achieved remarkable success in attracting FDI in 2018 because of the government’s investment-friendly policies, observed speakers at a media briefing here today.

They came up with the observation at the media briefing on ‘World Investment Report 2019, Bangladesh Scenario’ at the Sonargaon Hotel in the city on Monday.

Bangladesh Investment Development Authority (BIDA) organised the media briefing for giving the investment scenario of Bangladesh as per investment data of the United Nations Conference on Trade and Development (UNCTAD), which was published on June 12.

For attracting the FDI, Salman Fazlur Rahman said, the government is establishing Special Economic Zones (SEZs) across the country as per the direction of Prime Minister Sheikh Hasina.

“If we want to have real investment, we have to develop infrastructure. We have already given licenses to the 11 private SEZs. The government is also establishing public SEZs. Moreover, we are establishing specific country-wise SEZs,” he added.

He said several mega projects are ongoing for developing infrastructure and after implementation of the mega projects, the inflow of FDI will increase more.

Salman said the result of new ranking in the ease of doing business index would be announced at the end of this year and Bangladesh’s position in doing business ranking will be improved as the government is implementing various initiatives.

“We are amending various laws. We have a target to come down below 50 within the 24-month and in double digit within the 12-month,” he added.

Salman also informed that an integrated One Stop Service (OSS) center under BIDA will be developed within the year for getting all approvals to start business in the country within a short time.

Abul Kalam Azad said Bangladesh is moving forward by achieving remarkable success in all major indicators. “We are now focusing on investment. If we can increase our investment, revenue will be increased automatically,” he added.

Paban Chowdhury said the government should increase the collection of revenue from VAT and income tax instated of custom duty to attract more FDI in the country.

Aminul Islam said Bangladesh has become a potential hub for investment as the government is providing all sorts of supports to the investors.

He urged all to uphold the investment scenario of Bangladesh before the world.

He said the trade war between USA and China may have created some new opportunities for attracting investments from China-both Chinese domestic and foreign.

“Bangladesh should be ready to get some benefits out of this. All benefits should not go to Vietnam. We must also diversify our production base and eco-system to attract broad range of investor and not only RMG investors,” he added.